Clubbing of income, as the name suggests is the income of one person is clubbed with the income of the another person. Many of the persons think that if they will divert their income in the account of some other person, then their tax liability will get reduced. But this is not the case. 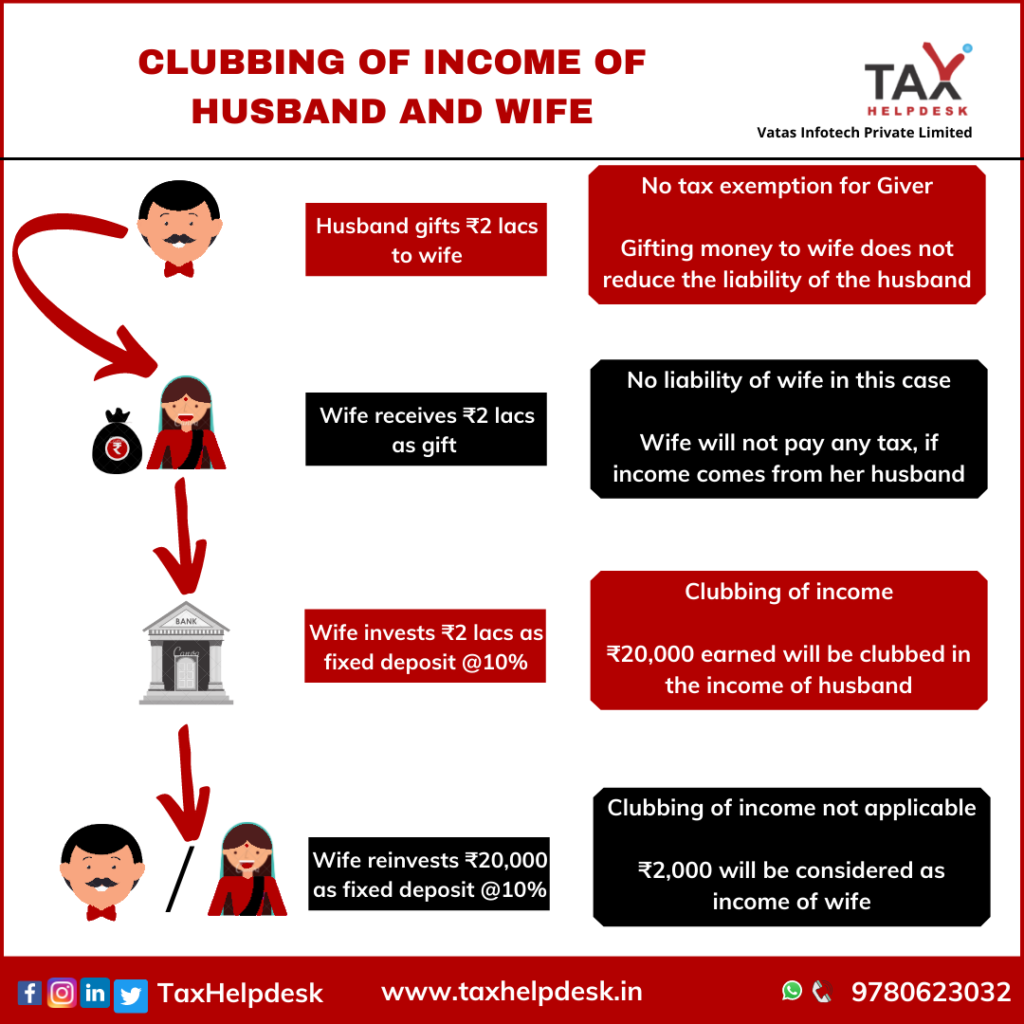 Provisions related to clubbing of income

The Income Tax Act, 1961 deals with the provisions of clubbing of income and as per this Act, every person has to pay taxes on his income. A person cannot transfer a part from his source of income to another person and claim that such income so transferred does not belong to him. For instance, income of husband which is shown to be the income of his wife is clubbed in the income of Husband and is taxable in the hands of the husband.

Clubbing of Income of Husband with Income of Wife

Clubbing of income of husband with income of wife is dealt under Section 64(1)(IV) and Section 27 of the Income Tax Act, 1961.

As per Section 64(1)(IV) of the Income Tax Act, there are certain conditions which have to be satisfied. They are as follows:
– Taxpayer is an individual
– He has transferred an asset other than house property
– The mode of transfer may be direct or indirect

Scenario 1:
If a husband transfers an asset in his spouse’s name without any consideration (directly or indirectly), then income from such asset will be clubbed in husband’s income.

Also Read: TDS On Cash Withdrawal From Bank In A Financial Year

The word “consideration” has been used under Section 64(1)(IV).

The above-said rules are applicable under Section 64(1)(IV) of Income Tax Act which does not deal with house property. But for house property,

Scenario 1
Assume Mr. A transferred his house property to his wife Mrs. A without adequate consideration, then in such a case, even if the property belongs to Mrs. A on papers, the deemed ownership of property is said to be with Mr. A. In future, if Mrs. A sells the property, then the capital gain from such property sale is the income of Mr. A but not of Mrs. A

This would, however, not cover cases where the property is transferred to a spouse in connection with an agreement to live apart.

Scenario 2
Now let us assume that instead of transferring the house property, Mr. A transferred Rs. 90 lacs to Mrs. A. In return, Mrs. A purchased a flat. The ownership, in this case, is with Mrs. A. However, any rental income or capital gains from this property is the income of Mr. A (even though here the ownership is with Mrs. A).

If you still have doubts regarding clubbing of income with your spouse, then feel free to contact our experts today at TaxHelpdesk!

If you want to know more about clubbing of income or take TaxHelpdesk’s experts consultation, then drop a message below in the comment box or DM us on Whatsapp, Facebook, Instagram, LinkedIn and Twitter. For more updates on tax, financial and legal matters, join our group on WhatsApp and Telegram!

Disclaimer: The views are personal of the author and TaxHelpdesk shall not be held liable for any matter whatsoever!