The ITC on capital goods can be availed on the GST paid for business purposes. However, if the depreciation has been availed on GST paid while purchasing capital goods, then no ITC can be claimed.

The ITC on capital goods can be availed like buildings, machinery, equipments, tools and vehicles that a person uses to produce goods or services.

For example, machinery used in the manufacturing of wheat flour is a capital good and ITC can be claimed in such asset. 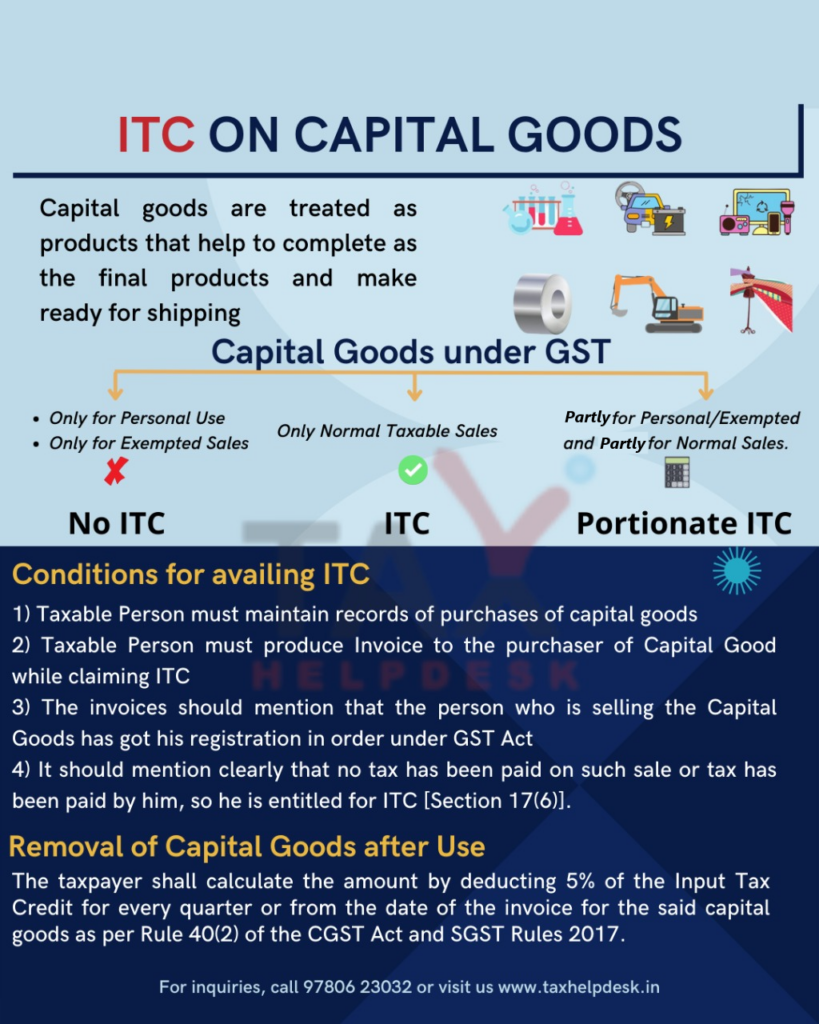 The GST ITC on capital goods can be claimed in the same way as inputs. The inputs are those which are used to make a final product and are considered as expenes

Having stated that, the capital goods are not consumed when the final product is made. They are not consumed in a single year of production. Therefore, they cannot be entirely deducted as business expenses in the year of their purchase. Instead, they are depreciated over the course of their useful lives. The business recognises part of the cost each year through accounting techniques as depreciation, amortization and depletion.

Also Read: Can you avail GST ITC on bank charges?

Types of ITC on Capital Goods

This will be indicated in GSTR-3B and shall not be credited to the electronic credit ledger.

For example, Hema has purchased a refrigerator for her home. Since, the fridge is not required for any business purpose, she will not be able to claim any GST ITC on capital goods.

Also Read: Can you claim GST ITC on travel?

If the capital goods are used for exempted sales, then no input tax credit can be availed.

The GST ITC on capital goods can availed if they are used for normal sales.

Illustration
XYZ has purchased machinery to manufacture garments. Since, garments are normal taxable supplies, the GST included paid while purchasing machinery will be completely available as ITC.

If the capital good is used partly for business and partly for personal purposes, then ITC can be claimed only on business purposes.

For example, David is a freelancer and travel blogger. He has a personal laptop which hhe also uses for his freelance work. He can claim the input credit of GST paid on purchase of laptop only to the extent it pertains to her freelance business. David has also purchased a special editing software. Since this pertains only to his business, he can claim full ITC on this.

1) Taxable Person must maintain records of purchases of capital goods
2) Taxable Person must produce Invoice to the purchaser of Capital Good while claiming ITC
3) The invoices should mention that the person who is selling the Capital Goods has got his registration in order under GST Act
4) It should mention clearly that no tax has been paid on such sale or tax has been paid by him, so he is entitled for ITC [Section 17(6)].

If you want to know more about GST or take TaxHelpdesk’s experts consultation, then drop a message below in the comment box or DM us on Whatsapp, Facebook, Instagram, LinkedIn and Twitter. For more updates on tax, financial and legal matters, join our group on WhatsApp and Telegram!

Disclaimer: The views are personal of the author and TaxHelpdesk shall not be held liable for any matter whatsoever!